The Smurfit Kappa paper mill in Roermond produces recycled container board from 100% recovered paper. They process 600,000 tons each year, collecting and recycling more than 25% of the  Netherlands annual recovered paper. 2013 winners of two Pulp and Paper International Awards, the mill is committed to sustainability and top performance. Part of this commitment is reflected in Roermond‘s own powerplant, comprising of 4 Allison 501 KB5 gas turbines used in industrial combined cycle.

The first 3 units were installed in 1983 and the fourth in 1987. These units were installed in the early days of cogeneration and helped launch the 501 engine as the workhorse in the 3-5 MW cogeneration sector. The 4 gas turbines produce on average 14 MWh of power, while the plant current needs average 19 MWh. The plant has to rely on the grid for anything they do not produce  themselves.

Despite being installed over 30 years ago, the Smurfit Kappa paper mill believes there is plenty of life left in the 501 packages and it‘s worth investing to maximize their power output. They invested in digital controls and in their air inlet systems. The air inlet system optimization had 2 objectives. First, they planned to retrofit each turbine filter house in order to minimize inlet pressure drop and they equipped each of the four housings with different filters in order to monitor performance and efficiency and select the best possible option.

Roermond is located in the Netherlands at the confluence of the rivers Maas and Roer and has a moderate maritime climate influenced by the North Sea and the warm Gulf Stream. Precipitations are high, with a yearly average of 768 mm, but are quite evenly spread, and temperatures average 10 °C. The average PM10 concentration is 23 µg/m3 and 15 µg/m3 for PM2.5, thus not a high dust area but the gas turbines had still been supplied with pulse filter systems. Even after the dust cake built up, the sticky nature of the dust rendered the pulse system ineffective.

In extremely dusty environments, a pulse filter system is the right choice. This kind of self-cleaning system allows full continuous operation at a low stable pressure drop. In areas such as Roermond, the low levels of coarse dust can lead to a low system efficiency as there is no dust cake formation. Traditional two dimensional surface loading pulse filters, when tested for filter efficiency, start at a low level and increase efficiency as the filter is loaded with dust. In the field, if the filter doesn’t  load quickly, it may run at its lowest efficiency for a long period of time.

As a solution, Camfil has introduced the GTC media, a three dimensional media with depth loading properties and a constant high efficiency. The synthetic fibers offer more strength and better performance even under high humidity conditions.

Both Camfil filters with the HemiPleatTM open pleating technology offered constant low pressure drop. Both have consistent flat pressure drop curves over time while the competitive filters showed sharper increase over time. The site typically got 2 years of filter life, but the trend shows they can expect at least 3 years from Camfil HemiPleatTM filters. 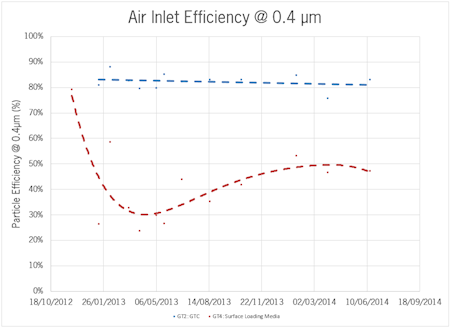 Efficiency trends illustrate the difference between the GTC 3D2 media that keeps a stable high efficiency and a typical surface loading media3 in a low dust environment. After losing its initial electrostatic charge, it takes several months before the filter starts to regain its efficiency.