这个站点使用cookie。继续浏览网站，您需要同意我们使用cookies。了解更多.
Critical Applications Can Count on CamGT EPA Filters
For an LNG Plant Located in the Gulf Coast of Mexico

With the development of shale gas and the high gas prices overseas, LNG export projects are multiplying in North America. A large majority are planning to use gas turbines to power their compression trains and as such, require an air inlet filtration system. Standard OEM supplied filtration systems do not always take into consideration the specific needs of LNG sites. Mainly located in coastal and industrial locations, they have to support the double burden of salt laden air and high dust load from their neighbouring industrial activities. LNG export requires continuous production, and as such, reliability and availability are highly critical.

Greenfield Plant on the Coast

One company realized the challenges they were facing and decided to invest early on to ensure they limit potential operating issues. Their future LNG plant will be located on the coast of the Gulf of Mexico, in an industrial area with high particulate matter.

Why are LNG sites so challenging?

A Step By Step Evaluation

Camfil proposed a step-by-step evaluation. Air sampling was first performed to analyse the size and concentration of the dust. After that, multiple life-cycle cost analyses were performed to identify an optimised inlet configuration.

A life-cycle cost analysis is an in-depth computer generated analysis of all the variables relevant to the filtration system choice: the environment, the pollutants in the air, the turbine model, the airflow, the heat rate, the cost of fuel, the average value of each MW produced, the cost of lost production due to downtime for compressor wash, filter change or maintenance schedule, system and filter pressure drop cost, the filter disposal cost, how fouling or pressure drop affects power out as well as CAPEX consideration.

The software simulation helped narrow the selection down to a 3-stage system with a final E12 stage. Selecting the right efficiency was just the start. Efficiency is a laboratory measurement done under dry controlled conditions. However, power plants are not located in laboratories. Actual site conditions and particle types vary widely and actual filter construction also influences performance.

To finalize selection, it was decided to bring a CamLab - an onsite testing trailer - on the future site to monitor the performance of the different recommended filtration options during 3 months of operation.

Camfil's recommendation was based on the LCC analyses and a successful LNG installation in Trinidad and Tobago - 26 units running for more than 4 years with no signs of power degradation (i.e. no  improvement recorded after the washes that are performed based on the OEM recommended maintenance schedule). 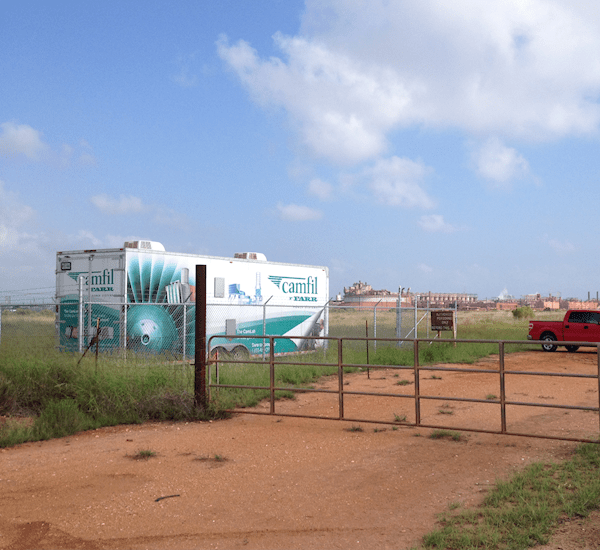 The conditions at the site were hot and humid, with average dust mass
concentrations of 30-40 µg/m³, and spikes as high as 120 µg/m³.

The CamLab‘s first test confirmed the harshness of the environment. 100% humidity days were frequent, and spikes in dust concentration were as high as 120 μg/m3, with a majority under a micron in size. To compare, 90% of US sites never see concentrations higher than 100 μg/m3 1. The 3-month test confirmed the superior efficiency of the two systems with the final E12 filter (99.99% efficiency vs. 85.7% means 1400 times less particle penetration2).

Final selection was made for the 3-stage system, but with the extended 24" depth CamGT 3V-600 as the final filter. Thanks to its lower initial pressure drop and larger media area leading to a longer life, expectations are that in baseload operations, the final 24" deep E12 filters would last even longer than the 5 years life of the 12" depth.

The small CAPEX increase for a 3-stage system with EPA grade final filter has proven its value in terms of performance during testing as well as in the field.

2 The extended 3V-600 has twice the depth as the 4V-300 12" compact filter, thus offering a lower pressure drop at the same efficiency. LCC estimation with 3-stages and final filter 24" depth: 12M USD.