This site uses cookies. By continuing to browse the site, you are agreeing to our use of cookies. Find out more.
Filter School
Module One

With Camfil's Filter School series, you can choose to return to the school bench over to learn fundamentals of filtration, get some extra learning or just bring yourself up-to-date. Or, if you are new to filtration, the articles will give you a "crash course" on the subject.

Camfil has run its own Filter School for many years to educate employees and customers about the exciting world of air filtration technology and why we need clean air solutions. The modules in the series are very general in nature just to teach the “ABCs.” The subjects are described in popular terms for easy understanding.

We would like to take the classroom to you, right on our website, to explain our business in eight separate modules.

Pollutants can be natural or result from the influence of human beings. They can be classified as primary or secondary. Primary pollutants are emitted from a process, or they are produced by a human activity, such as carbon monoxide from engine exhaust, or Sulphur dioxide from coal and petroleum combustion, or nitrogen oxides from high-temperature combustion. Secondary pollutants are not emitted directly but form when primary pollutants react or interact, like ground-level ozone.

Air pollutants cause health problems and much damage. In Europe alone, atmospheric pollution is estimated to cost hundreds of millions of euros per year in terms of eye and respiratory infections, lung cancer and cardiovascular disease, and in terms of general environmental damage.

Atmospheric pollution in Europe is estimated to cause up to 500,000 premature deaths annually. On a worldwide basis, the figures are just as alarming; more than two million people die too early because of exposure to air pollution, according to the World Health Organisation (WHO).

There are two main sources of particulate matters in the air we breathe. Some occur naturally, originating from the seas spray, deserts, living vegetation, and forest and grassland fires. Some particles are important, such as airborne pollen or the very fine dust particles on which water vapour condenses to form raindrops. Then we have anthropogenic particles (produced by human activities) originating from combustion processes and industrial emissions containing undesired contaminants and damage the environment.

Vehicle traffic is the largest source, with diesel engines contributing considerably to particulate emissions. In 2012, the International Agency for Research on Cancer (IARC), part of WHO, classified diesel engine exhaust as carcinogenic to humans; it was thought to be a “probable carcinogen” before.

Particulate matter and other airborne pollutants penetrate the indoor environment through open windows and doors and through ventilation systems operating without effective filters. Inside, they mix with a cocktail of other indoor pollutants that may be present.

This is why our indoor air can actually be more seriously polluted – up to 50 times more than out- door pollution, involving greater health risks for the young, elderly and chronically ill, especially in urban environments and in areas with heavy vehicle traffic. Filters to clean indoor air – in commercial and public buildings and production plants, for example – is Camfil’s largest business. 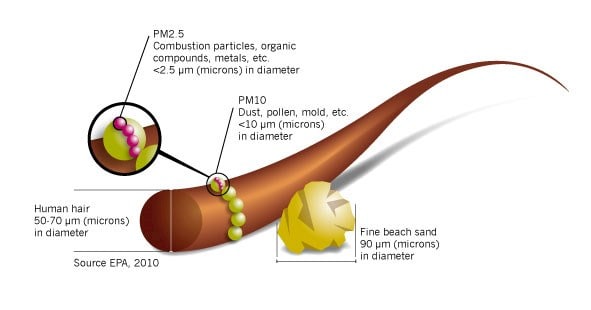 The most common way to measure and describe atmospheric particles has been to measure their weight and divide them into two fractions – PM10 (particulate mass smaller than 10 μm) and PM2.5 (particulate mass smaller than 2.5 μm). These fractions provide limit values for air quality but are insufficient for describing what the particles actually are because they do not indicate their attributes, actual size and/or chemistry, which are of the greatest importance for indicating their health effects. Another problem is that atmospheric dust contains a large number of small particles that have little or virtually no mass or volume. Measuring the particulate mass (weight) of these particles is misleading.

Another way to measure the particle content is to use a scanning electron microscope (SEM). Particles are collected on special specimen stubs for later analysis. The analysis provides detailed information about the number, size and shape of the particles. Individual particles can be analysed for their com- position of various elements.

The SEM method identifies the airborne contaminants, such as mould spores, dust and biological matter that can pose a health risk for people in homes and workplaces. The method has been typically used to improve indoor air quality (IAQ) in schools and hospitals. In a typical field measurement, particles are collected from at least two measuring points: from outdoor air and in a ventilation duct after an air filter. By comparing the results from the two sources, it is possible to measure the efficiency of the filter. Measurements can be made in several different places to localise the source of an IAQ problem.

Why we need clean air

A number of airborne pollutants come from out- doors, while others are produced indoors. They can be generated by a manufacturing process or by some activity that we perform. Examples are heat, carbon monoxide and dust.

The main task of a ventilation system is to remove airborne pollutants to keep air clean on the premises. Air (exhaust air) is removed from rooms and filtered before it passes through an air handling unit (AHU), which helps protect the AHU and its internal components. After the AHU, the air is exhausted outside the building.

Outdoor air is brought into the building and filtered before it passes through a heating/cooling coil and the AHU, and before it is supplied to rooms (supply air). Supply air can also be subjected to additional filtration.

An air purifier can be used to supplement the existing ventilation system and further improve IAQ. In manufacturing facilities, for example, air purifiers (mounted on walls or ceilings, or stand- alone) can reduce energy costs, boost production efficiency and create a healthier work environment containing less dust and fewer harmful particulates. In homes and schools, air purifiers reduce the number of airborne particulates and improve IAQ.

Wrapping it all up
In summary, airborne pollutants cause billions in damage, no matter which currency you calculate it in. They have negative effects on our health and well-being. A growing number of studies confirm that particulates have serious health impacts. Reducing the number of airborne particulates reduces the health risks. Atmospheric dust contains a very large number of fine particles that are invisible to the naked eye. Air filters protect people, processes, manufactured goods, the building ventilation system and the outdoor environment.
联系我们